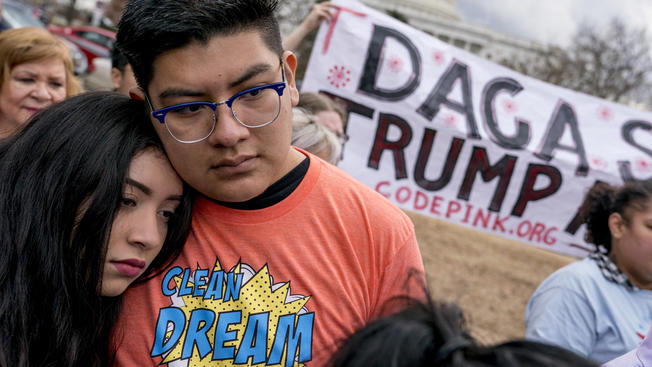 The state of Texas asked a federal judge Wednesday to rule against a program shielding 700,000 young immigrants from deportation, arguing they drain state resources and never should have received federal protection.

Supporters of the Deferred Action for Childhood Arrivals program, or DACA, argued that the state’s claims were baseless during a hearing in a lawsuit that’s being closely watched by immigrants and advocates on both sides.

U.S. District Judge Andrew Hanen did not immediately issue a ruling Wednesday. But he asked pointed questions of both sides about how this case compared to his ruling three years ago against another expansion of immigrant protections by former President Barack Obama.

In that case, Hanen ruled against an expansion of DACA and new protections for immigrant parents. A federal appeals court sided with Hanen and the U.S. Supreme Court split 4-4, leaving his ruling in place. The expanded protections never went into effect.

If Hanen rules in Texas’ favor, legal experts say that conflict would draw the attention of higher courts and potentially the U.S. Supreme Court.

DACA has authorized around 700,000 people brought to the U.S. illegally as children to obtain work permits and driver’s licenses. Texas joined several other states in filing a lawsuit to halt the program in May, arguing that DACA recipients drain millions of dollars in education, health care and law enforcement funding, and that they take jobs from American citizens.

Continue reading more about this case and the issues behind it by clicking here.

Stay informed on news that matters to you by clicking here to subscribe to our newsletter.