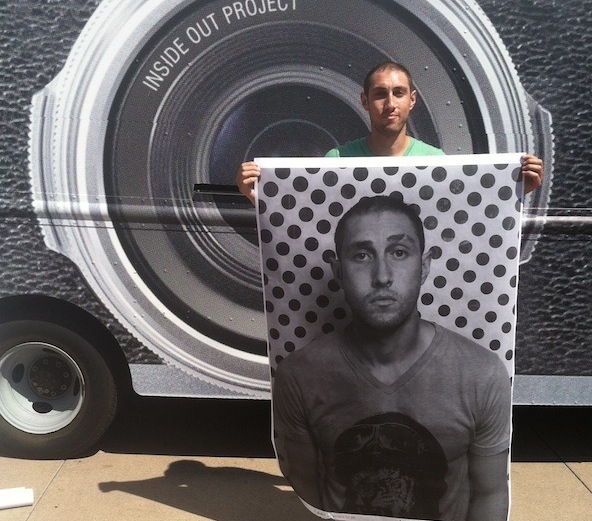 A nationwide participatory art project calling for immigration reform is making a statement in Arizona.

A mobile photobooth outside Pima County Public Library is shooting and printing the portraits of passer-by who want to express solidarity with the 11 million undocumented immigrants in the U.S.

Dozens of poster-size pictures in black and white lay on the bricks of Jácome Plaza on Tuesday afternoon. The project aims to print 186 photos by Wednesday, the last day before the tour moves on.

The action is meant to urge Congress to enact legislation providing a pathway to citizenship for millions of undocumented people.

The project, named “Inside Out 11M,” is a partnership between Emerson Collective, a progressive corporation, and French artist Jean René, famously known as JR.

Tucson is the fifth stop on a 16-city tour that will end Sept. 14 in Washington, D.C. The project made its stop in Phoenix on Sunday and Monday.

“Arizona has been ground zero for a lot of the debates around immigration and the border,” said Marshall Fitz, managing director of immigration with Emerson Collective, explaining why Phoenix and Tucson were chosen as destinations. “There is a vibrant movement of immigrant rights.”

Tucson Mayor Regina Romero showed up at the event on Wednesday morning to express her support. In a letter sent on July 26, she was one of more than 80 mayors urging President Joe Biden’s administration to prioritize citizenship for immigrants.

“We want to make sure that we have a legal path to citizenship and that we act now, and not put this issue on the backburner,” Romero said.

“I am really proud of Tucsonans for taking a stance and helping in this effort.”

Estimates vary on the number of undocumented immigrants in Arizona. The Migration Policy Institute estimated there were 218,000 by 2018. The Department of Homeland Security estimates 330,000 for the same year.

Eighty-six percent are from Mexico and Central America and over 50% of the total has been living in the U.S. for 10 to 20 years, according to MPI. This translates into broad family and community ties. About a quarter-million of U.S. citizens in Arizona live with someone who is undocumented.