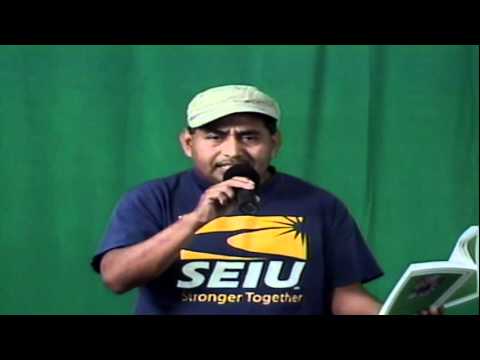 He inspired other janitors in a movement that led to increased wages.

He spoke outside Congress and met with President Barack Obama in the White House.

“We’re human beings, not animals, and it is hard to live without justice,” Patraca, 57, said recently before riding a bus to his late shift at Coors.

But despite his successes, he’ll return to Mexico because an elderly uncle no longer can manage the farm he left as a boy. And Patraca for two decades hasn’t seen his daughter, now 28, or met his granddaughter, due to his fear that U.S. authorities wouldn’t re-admit him — the plight of millions of immigrant workers who aren’t legal residents.

“It’s been a huge sacrifice,” he said, “but life is formed with continuous separations and I’ve always maintained the hope that — someday — we’re going to gather together.”

He plans to leave in March 2023, instead of trying to become a legal U.S. resident, and revive the 20-acre farm, at Paso De La Venta, near Veracruz. He’ll grow chilis, tomatoes, lemons, mangoes and tamarinds to sell in local markets, he said. He also plans to produce a new book of poems called, “Without Borders,” about his travels looking for work.

Patraca is “emblematic of a pattern we are seeing with Mexicans choosing to leave the United States,” said Michelle Mittelstadt, spokeswoman for the Migration Policy Institute, a think tank based in Washington, D.C. The institute’s latest analysis of federal data shows that the 10.9 million Mexico-born population in the United States has decreased over the past decade by 780,000 as many voluntarily return to communities they left years ago to earn money.

He had no formal schooling. His father died when he was 5, forcing his mother to leave the farm with him to work in Veracruz. Her friend taught him to read and write, he said, and at 8 he wrote his first poem.